Did you know about Boston’s rich past as being the political, commercial, and financial center of New England in the mid-1600’s? We’ve got a summary of Boston’s history to give you a background about the city before visiting it with us on our Boston bus tour.

The history of Boston plays a central role in American history. Boston was founded in 1630 by English Puritans fleeing religious persecution and it quickly became the political, commercial, financial, religious and educational center of the New England region. On March 29, in1630 a fleet of 11 ships carrying 700 people sailed from England to Massachusetts.

The Puritans hoped to create a ‘city on a hill’ as a shining example of a Godly society for the entire world to see. Instead, they created a society just as intolerant as the one they had left. Nevertheless the new settlement flourished. In 1631, the first sailing ship built in America was launched from Boston and soon the shipbuilding industry thrived. There was also a flourishing whaling industry and a fishing industry. With its excellent harbor, Boston became the leading commercial center in the colonies.

The first printing press in the colonies was built in Cambridge by Stephen Daye in 1639. In 1635 the Boston Latin School, the first American public school, was opened. A College, later renamed to the today’s well-recognized Harvard, was founded in Boston one year later in 1636. In 1676, the first ever coffeehouse opened in Boston, where merchants and professional men could meet and chat over a cup of coffee. By then, Boston was a thriving town with a population of about 4,000 inhabitants.

Separated by a great geographical distance, the American colonies were still loyal British subjects. This began to change in the 1730’s when the Crown increased taxes on the colonists to help replenish the treasury. Boston became a leading center of colonial resistance as a great philosophical distance began to grow between the Colonies and Britain. The Stamp Act of 1765, the Townshend Acts of 1767, led to the Boston Massacre in 1770. The Tea Act of 1773 resulted with The Boston Tea Party. Two months later, after the Battle of Bunker Hill, George Washington was summoned to Boston to take command of the rebel army.

Massachusetts prospered in the early 19th century with improved roads, new canals, and the construction of railways linking cities and towns. Laborers were recruited locally but by the 1840’s there were not enough locals to fill the work force. The answer came with the arrival of the first non-English immigrants from Ireland. The Civil War was a profitable time for Boston manufacturers, with the production of weapons, shoes, blankets, and other materials for the troops.

Boston also played a role as a leading voice of the abolitionist movement. The late 19th century was Boston’s greatest industrial era. As millions of immigrants from around the world came to America, Boston continued as a leading manufacturer of a wide variety of goods and products.

By the 1950′ fishing and farming were in decline in Massachusetts, but the Boston area emerged as a leader in the fledgling computer and high-tech industries. Many of these new businesses were created and staffed by graduates of MIT and the other colleges in the Boston area. The financial and service industries continued to expand.

In 2007, the Central Artery/Tunnel project was completed. Nicknamed the Big Dig, it had been planned and approved in the 1980s under Massachusetts governor Michael Dukakis. With construction beginning in 1991, the Big Dig moved the remainder of the Central Artery underground, widened the north-south highway and created local bypasses to prevent east-west traffic from contributing to congestion. 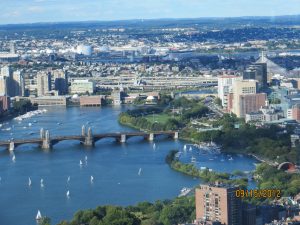 Today, the Boston skyline is brimming with skyscrapers and office towers as a testament to Boston’s achievements and its vitality. Boston is a city with a rich past, but it is also a city looking ahead to tomorrow. Join us on our Boston bus tour to discover the beauty of this city!