London’s Tower Bridge is one of the most recognizable bridges in the world. Its Victorian Gothic style stems from a law that forced the designers to create a structure that would be in harmony with the nearby Tower of London.

In the beginning, the London Bridge was the only one across the river of Thames, but while the city started to develop, more bridges were added across Thames. At the end of the 19th century the decision of adding a new bridge over Thames was made as there was the need for a bridge downstream of London Bridge, which would not disturb the river traffic activities. This is how the London Bridge got to be built and was opened for the first time on the 30th of June in 1894. 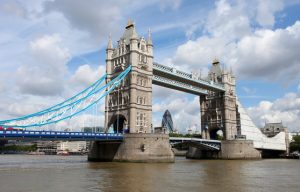 The problem of building a bridge over a busy river, with low banks so that shipping is not obstructed is that it taxes the resource and ingenuity of the engineer. The bridge consists of two towers which are tied together at the upper level by means of two horizontal walkways. The walkways are designed to withstand the horizontal forces exerted by the suspended sections of the bridge to the left and the right. The vertical component of the forces in the suspended sections and the vertical reactions of the two walkways are carried by the two robust towers. The bascule pivots and operating machinery are housed in the base of each tower. Its present color dates from 1977 when it was painted red, white and blue for the Queen’s Silver Jubilee. Before this, it was painted a chocolate brown color.

Tower Bridge is sometimes mistakenly referred to as London Bridge which is actually the next bridge upstream. A popular urban legend is that in 1968 Robert McCulloch, the purchaser of the old London Bridge which was later shipped to Lake Havasu City, Arizona, believed mistakenly that he was buying Tower Bridge, but this was denied by McCulloch himself and has been debunked by Ivan Luckin, the seller of the bridge.

Tower Bridge features its own bridge exhibit, offering a chance to learn about the history of the bridge, see the inside and the mechanics of what makes Tower Bridge work. Within close distance of the Tower of London, you can visit quite a few popular attractions such as the Tower of London, St Katharine Docks, Shad Thames and HMS Belfast as well that you can show you during our bus tour to London!