The history of French cuisine dates back to the middle ages. During this time French meals where very similar to Moorish Cuisine (the food of North Africa and the Iberian Peninsula) and were served in a style called service en confusion, meaning that meals were served all at once. Meals consisted of spiced meats such as pork, beef, poultry, and fish. In many cases, meals where determined by the season. Meats were salted and smoked for preservation, and vegetables were salted and put in jars to preserve for the winter months. 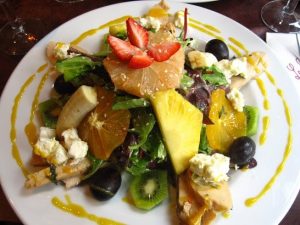 The Middle Ages brought Guillaume Tirel, better known as Taillevent. The modern age, starting in the 17th century, however, saw a move toward fewer spices and more liberal usage of herbs and creamy ingredients. This began with La Varenne and further development with the notable chef of Napoleon and other dignitaries, such as Marie-Antoine Carême. During this time, the presentation of the meal was also very important. The more lavish and colorful the display, the better the meal. For more colour, cooks would use edible items such as saffron, egg yolk, spinach, and sunflower. One of the most extravagant dinners of this time was a roast swan or peacock which was sewn back into its skin and feathers to look intact. The feet and beak were gilded with gold to complete the spectacle.

French cuisine was codified in the 20th century by Georges Auguste Escoffier to become the modern version of haute cuisine. Escoffier was chef and an owner of many restaurants, as well as a culinary writer. Escoffier also developed a system to organize and manage a professional kitchen. The system was called a “brigade system” and separated the kitchen into five sections. In this system, each member of a designated section created a specific part of the dish. The sections included the “garde manger” that prepared cold dishes; the “entremettier” prepared starches and vegetables, the “rôtisseur” prepared roasts, grilled and fried dishes; the “saucier” prepared sauces and soups; and the “pâtissier” prepared all pastry and desserts items. By reorganizing the manufacturing of dishes within the kitchen, Escoffier was able to cut down on the time that was required to prepare a dish, in turn making professional kitchens more efficient. 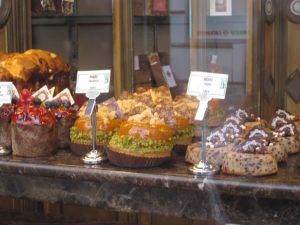 Present day French meal structure is divided into Le petit déjeuner, Le déjeuner, and Le dîner (Breakfast, Lunch, and Dinner). Breakfast often consists of “tartines” which are small slices of French bread which are then spread with jelly, and or pastries. Lunch, on the other hand, was once known as one of the largest meals of the day, and in many professional situations workers would be allowed a two hour lunch break. Though in today’s French society, many French workers are allotted an hour for lunch, which most use to eat out or at the business or school’s cafeteria. Today, dinner is the biggest and most lavish meal for the French. In most cases, dinner consists of three courses: the entrée, the plat principal or main course, and the cheese or desert course. Some popular French dishes include Blanquette de veau (blanquette of veal), Coq au vin (rooster in red wine), Bouillabaisse (fish soup), and Boudin blanc (delicate flavored sausage).

Wine is also an essential part of French meals, and it has a rich history in France. Often, a different wine is paired with each course in a meal, and each wine is picked depending on what is being served for each course. An interesting fact is that although France is known for its wine, there has been a 60 percent drop in the consumption of wine during meals throughout France! Instead, there has been a rise in fruit juice, water, and beer consumption, as well as other alcoholic drinks mixed with cider or other mixers.

There are many significant regional dishes that have become both national and regional. Many dishes that were once regional have proliferated in variations across the country. Try it for yourself when visiting Paris on our London/Paris bus tour.