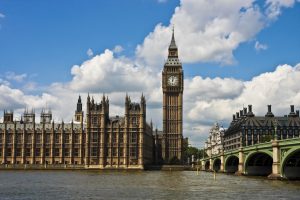 Big Ben is the nickname for the great bell of the clock at the north end of the Palace of Westminster in London, and it is often referred to as the clock tower. In 1844, it was decided the new buildings for the Houses of Parliament should include a tower and a clock. A massive bell was required and the first attempt (made by John Warner & Sons at Stockton-on-Tees) cracked irreparably. The metal was melted down and the bell recast in Whitechapel in 1858. Big Ben first rang across Westminster on 31 May 1859. A short time later, in September 1859, Big Ben cracked. A lighter hammer was fitted and the bell rotated to present an undamaged section to the hammer. This is the bell as we hear it today.

The tower is now officially called the Elizabeth Tower, after being renamed in 2012 to celebrate the Diamond Jubilee of Queen Elizabeth II. There are two origins of the bell name: the first is that is was named after Sir Benjamin Hall, the first commissioner of works, a large man who was known affectionately in the house as “Big Ben” and another one is that it was named after a heavyweight boxing champion at that time, Benjamin Caunt. Also known as “Big Ben”, this nickname was commonly bestowed in society to anything that was the heaviest in its class.

The clock tower rises 96m high and consists of a 61m high brick shaft topped by a cast iron framed spire. The clock faces are 55m above ground level. Big Ben’s timekeeping is strictly regulated by a stack of coins placed on the huge pendulum. In fact, Big Ben has rarely stopped working. Even after a bomb had destroyed the Commons chamber during the Second World War, the clock tower managed to survive and the Big Ben continued to strike the hours. The chimes of Big Ben were first broadcast by the BBC on 31 December 1923, a tradition that continues to this day. And even a special light above the clock faces is illuminated when parliament is in session.

The Houses of Parliament’s iconic clock tower is one of London’s most famous landmarks. Don’t miss a chance to see Big Ben with Comfort Tour Canada!