Double-decker’s are a fun and easy to get around any city, not to mention that they will allow you to see all the main highlights of the city within reasonable time! Although our during your London/Paris tour includes a bus excursion and river cruise, you also have the option of taking a ride on the red, double-decker bus free time! 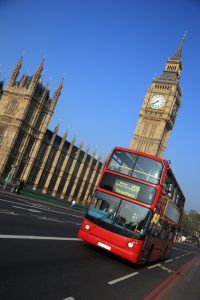 Double-decker buses can be traced back to the 18th and 19th century when people would travel by horse-drawn carriages. They would sit on top of the coaches while traveling through the city or from village to village. From this, motorized double-decker buses with seating on the roof emerged as a natural progression. The iconic red double-deckers of the United Kingdom hit the suburban and urban streets beginning in 1956.

Although many European and American urban centers use double-deckers as a means of public transportation, private businesses, such as the Brazilian-based Marcopolo, S.A., have adopted double-deckers to guide sightseers. There are also double-deckers that are being designed for environmentally-friendly commuting. With the increasing concerns arising over global warming, and commuters looking to save gas money, the re-introduction of the double-decker would be a sound solution to both woes by transporting a great amount of people in one trip.

The major development was the introduction of the Routemaster London Bus, first built in 1954, and put into commercial service two years later. The Routemaster, in bright red, became one of the iconic sights to see in London and is well known worldwide. The popular Routemaster survived many improvements and redesigns. It also had undergone the privatization of the London Bus Service and thus, stayed in continuous service in London from 1956 until December 8th 2005, when the last service came to an end.

Open-top double-decker sightseeing tours are most beneficial in cities with high buildings, but are drawbacks in rainier climatess since only the front of the upper level is shielded from the rain. Completely enclosed double-decker tours hamper visibility since you are only able to look to the left and the right. Both types of tours can be guided, either via a pre-recorded audio tape or a live tour guide.

You can take your chance to ride on a double – decker bus while being with us on our London/Paris tour this fall!

Covid -19 Trip Update:Office hour operation limited – Questions ? email us – contact@comforttour.caAll future bookings are pending, 15 days prior to any scheduled trip, we will email to confirm the status of your trip. At that moment, you will have option of postponing trip, putting your booking on hold or get refund for your deposits.