The White House in Washington, D.C

The White House, built between 1792 and 1800, is the oldest public building in Washington, D.C and serves as both the home of the U.S. President and a museum of American history. A competition held for the design of the new President’s House received nine entries. The winner was James Hoban, an architect of Irish descent. His neo-classical design is presumably based on the Leinster House in Dublin. 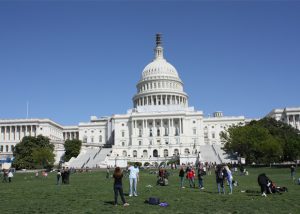 Here is a description of the rooms in the White House:

The Blue Room: This room is inthe center of the State Floor of the White House. Over the years, the Blue Room’s oval shape, with its breath-taking view of the South Lawn of the White House, has captivated many visitors. The Blue Room has been the traditional place for presidents to formally receive guests. From entertaining kings to shaking hands with the masses, the business of democracy and the social graces of diplomacy have taken place in the Blue Room. Preferences for oval rooms date to the time of George Washington. As his guests formed a circle around him, Washington would stand in the center to greet them. The circle became a symbol of democracy.

The Green Room: This is where Thomas Jefferson hosted dinners, but it has been a parlor since Madison’s presidency. A beautiful silver coffee urn belonging to John and Abigail Adams from the early 1800s can be found in this room as well. As you are passing through the room, look out one of the windows toward the grassy area and you may just see the presidents black and white dog, Bo, running around.

Furnished in the Empire style of 1810-30, the Red Room —one of four state reception rooms in the White House—contains several pieces of furniture from the New York workshop of the French-born cabinetmaker Charles-Honore Lannuier. The elegance of the Red Room furniture derives from a combination of richly carved and finished woods with ormolu mounts (decorative hardware made of gilded bronze) in characteristic designs such as dolphins, acanthus leaves, lion’s heads, and sphinxes.

The Cabinet Room: This room is located in the West Wing of the White and is adjacent to the Oval Office. The Cabinet Room is where the secretaries and advisors gather to hold audience with the President.

James S. Brady Press Briefing Room: This is a small theater in the West Wing where daily briefings are held by the press secretary. The President sometimes addresses the press and the nation.

Roosevelt Room: Located in the West Wing, this room acts as the official workplace of the President.

China Room: A collection of state china is on display here and covers pieces from President Washington’s Chinese china to President Clinton’s china, which commemorates the 200th anniversary of the occupancy of the White House. The First Lady generally makes use of this room for tea, meetings and hosting small receptions.

State Dining Room: This room is used when the head of state comes to visit and a formal dining setting is needed.

Treaty Room: As one of the rooms used by the First Family, the Treat Room is primarily used by the President.

Lincoln Bedroom: The most well known room other than the Oval Office, the Lincoln Bedroom was used as Lincoln’s office. Today, it is primarily an award from the president to their friends and supporters and used as a guest suite.

The East Room: Used as the chief area for entertaining, the East Room is also the largest room in the White House.

Map Room: Located on the ground floor of the White House, the Map Room got its name from Franklin Roosevelt’s use of it during World War II. He used it as a situation room where maps of troop movements were hung.

When on the Washington bus tour with Comfort tour, you will have the opportunity to visit the exterior of the White House.