These words are written at the Michael Jordan statue…

Professional basketball player, Olympic athlete, businessperson, and actor – Michael Jordan – was born on February 17, 1963, in Brooklyn, New York. Considered one of the best basketball players of all time, Michael dominated the sport from the mid-1980s to the late 1990s. He led the Chicago Bulls to six national championships and earned the National Basketball Association’s Most Valuable Player Award five times. In April 2009, Jordan received one of basketball’s greatest honors: he was inducted into the Naismith Memorial Basketball Hall of Fame.

Jordan remains active in his sport. He became the majority owner of the Charlotte Bobcats in 2010 and serves as the team’s chairman. And improving the team’s less-than-stellar record seems to be Jordan’s number one priority these days. He told ESPN in November 2012 that “I don’t anticipate getting out of this business. My competitive nature is I want to succeed. It’s always been said that when I can’t find a way to do anything, I will find a way to do it.”

Outside of his work with the Charlotte Bobcats, Jordan is involved in a number of business ventures, including several restaurants. He also does a lot for charity, including hosting the annual golf event known as the Michael Jordan Celebrity Invitational. 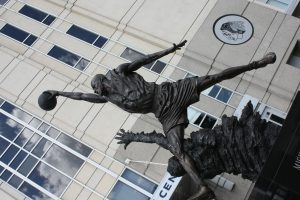 The Michael Jordan statue, officially known as The Spirit, is a bronze sculpture by Omri Amrany and Julie Rotblatt- Amrany outside the United Center in the Near West Side community area of Chicago.

The statue itself measures 17 feet from top to bottom and weighs 2,000 pounds. The statue was cast in bronze using the “lost wax” method at Art Casting of Illinois, a foundry in Oregon, Illinois. Working in secrecy, and putting in 16-hour days, seven days a week for four months, the Amrany’s finished work depicts Jordan soaring over an abstract entanglement of opponents, preparing to unleash one of his signature dunks.

Statue was unveiled as part of a November 1, 1994 ceremony at which Jordan’s famous No. 23 was retired. All day long, and both prior to and after United Center events, people from all over the world come to visit and have their picture taken in front of one of Chicago’s most famous and recognizable landmarks.

Almost 10 years passed but the Michael Jordan statue is one of Chicago’s favorite tourist attractions.