One of the most interesting sites on Boston’s Freedom Trail, and always a huge favorite with kids and teens, is the USS Constitution that offers tours conducted by its Navy crew members. You can visit USS Constitution Museum, Old Ironsides during on our bus tour to Boston.

You get to see the top deck, gun deck, and berth area, plus you get the thrill of walking around this magnificent ship built in 1797, the oldest commissioned warship still afloat anywhere in the world.

Best of all are the guides’ stories about life aboard the ship 200+ years ago, tidbits about her legendary battles, and explanations of the Constitution’s important role in American history. Adding to the authenticity, crew members wear 1812-style uniforms. 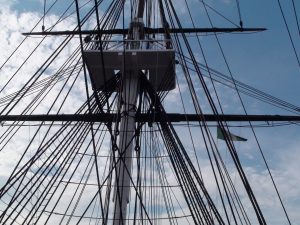 Designed to combine speed with fire power, the Constitution fought numerous battles against the British during the War of 1812. After defeating five British warships and capturing numerous merchant ships, her moment of glory came during a fierce battle against the mighty British frigate HMS Guerriere. The two frigates collided and nearly capsized but they still continued to fight.

By the end, the Constitution had pulverized the Guerriere but most of the Guerriere’s shots and cannon balls simply bounced off the hull of the American ship. When she returned to port in Boston, cheering crowds re-christened her “Old Ironsides.”After extensive restoration, she now serves as a museum ship.

Every July 4th, the Constitution appears in Boston Harbor as part of the huge Harbor fest celebration. Additional turn-around cruises occur a few more times each year. You’ll get a view of the harbor atop this beautiful sailing vessel and the chance to meet a real U.S. Navy Sailor!

More information about the museum can be found there: