In the fall of 1773, the East India Company dispatched seven ships loaded with tea to North America. While four sailed for Boston, one each headed for Philadelphia, New York, and Charleston. Learning of the terms of the Tea Act, many in the colonies began to organize an opposition. Arriving in Boston, the tea ship Dartmouth was prevented from unloading. Calling a public meeting, Sons of Liberty leader Samuel Adams spoke before a large crowd and called on Hutchinson to send the ship back to Britain. Aware that law required Dartmouth to land its cargo and pay duties within twenty days of its arrival, he directed members of the Sons of Liberty to watch the ship and prevent the tea from being unloaded. Two other ships, the Beaver and the Eleanor, arrived with more consignments from the East India Company. The fourth ship was drowned somewhere in the sea.

So called “the Boston Tea Party” took place on December 16, 1773, when colonists threw tea into the Boston Harbor. They did this because they didn’t like the British tea taxes. 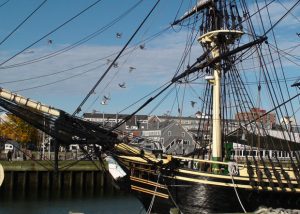 The British people in Parliament didn’t admire this action. They got mad and passed the Intolerable Acts as punishment for the Boston Tea Party. The worst part of these acts was that they closed the Boston Harbor and said that the city had to pay for the tea that had been dumped into the harbor.

According to historian Alfred Young, the term “Boston Tea Party” did not appear in print until 1834. Before that time, the event was usually referred to as the “destruction of the tea”. According to Young, American writers were for many years apparently reluctant to celebrate the destruction of property, and so the event was usually ignored in histories of the American Revolution. This began to change in the 1830s, however, especially with the publication of biographies of George Robert Twelves Hewes, one of the few still-living participants of the “tea party”.

Interestingly, the founders of the United States were not against of taxing tea. A tax bill was submitted in the 1st United States Congress even before the inauguration of George Washington. The bill was passed and signed into law by Washington on July 4, 1789, with a tax on tea from 6 cents to 20 cents per pound, and at double of that rate if carried on a foreign-flagged vessel. The tea tax remained in effect until 1872, at which time it generated $10 million per year, or about 2% of all Federal revenue.

In 2006, a libertarian political party called the “Boston Tea Party” was founded. In 2007, the Ron Paul “Tea Party” money bomb, held on the 234th anniversary of the Boston Tea Party, broke the one-day fund-raising record by raising $6.04 million in 24 hours. Subsequently, these fund-raising “Tea parties” grew into the Tea Party movement, which dominated politics for the next two years, culminating in a voter victory for the Republicans in 2010 who were widely awarded seats in the United States House of Representatives.