“Any colour – so long as it’s black”
Henry Ford

Automobile manufacturer Henry Ford was born July 30, 1863, on his family’s farm in Dearborn, Michigan. From the time he was a young boy, Ford enjoyed tinkering with machines. Farm work and a job in a Detroit machine shop afforded him ample opportunities to experiment. He later worked as a part-time employee for the Westinghouse Engine Company. By 1896, Ford had constructed his first horseless carriage which he sold in order to finance work on an improved model. 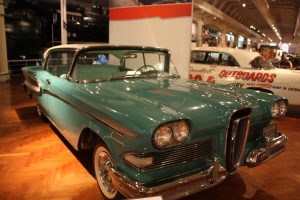 Ford incorporated the Ford Motor Company in 1903. Nearly 15.500.000 cars were sold in the United States alone. The Model T heralds the beginning of the Motor Age, the car evolved from luxury item for the well-to-do to essential transportation for the ordinary man. Henry Ford started gathering his collection in 1906.

The Henry Ford is the largest indoor-outdoor museum complex in America. Patrons enter at the gate, passing by the Josephine Ford Memorial Fountain and Benson Ford Research Center. Nearly one hundred historical buildings were moved to the property from their original locations and arranged in a “village” setting. The museum’s intent is to show how Americans lived and worked since the founding of the country. The Village includes buildings from the 17th century to the present, many of which are staffed by costumed interpreters who conduct period tasks like farming, sewing and cooking. A collection of craft buildings such as pottery, glass-blowing, and tin shops provide demonstrations while producing materials used in the Village and for sale. Greenfield Village has 970,000 m² of land of which only 360,000 m² are used for the attraction, the rest being forest, river and extra pasture for the sheep and horses.

“Heroes of the Sky” features dozens of historic airplanes: Byrd’s Arctic Fokker, a Sikorsky helicopter, and early commercial and barnstorming planes. But the museum’s highlight is, not surprisingly, “The Automobile in American Life,” exploring nation’s infatuation with cars. Ford’s 1901 Model-T, the Oscar Meyer Wienermobile, and a host of presidential cars, including the limousine in which Kennedy was shot are all can be found there.

A hundred genuine 17th-, 18th-, and 19th-century homes were transported from throughout the U.S. and Europe to bring history to Detroit. The Wright brothers’ bicycle shop, Edison’s laboratory, and a collection of slave quarters are highlights.

The Henry Ford’s newest addition is the Ford Rouge Factory Tour. Visitors view the production of Ford’s most popular truck, the F-150, through the magic of virtual reality and an assembly plant walking tour.

Official web-site of the Museum is here